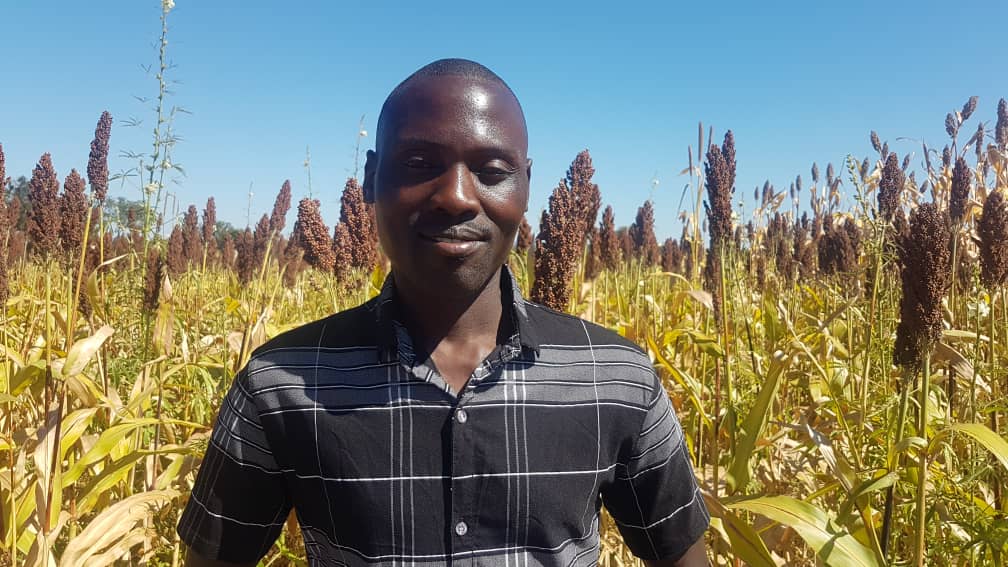 Story originally published in The Sunday Mail – 2 May 2021 (Fanuel Kangondo and Munya Simango)
When Madala Masukume (41) decided to focus his energy on agriculture in the environs of Insiza communal areas nearly four years ago, little did he know that he would soon be the focus of the district.  In this short space of time, members of his community are now seeing him as the beacon of success, which is driven by research and good agronomical practices.
Inspired by the research and knowledge-sharing approach that has transformed the livelihoods of fellow villagers in the neighbourhood, Mr. Masukume has warmed up to the guidance and services that are provided by Agritex officers at the Insiza District Agricultural Centre of Excellence. He has awoken to the centre’s thrust on productivity-enhancing practices that are grounded in research and knowledge sharing.
The convergence of research, good agricultural practices, and dissemination of information to farmers are at the core of the EU-funded Zimbabwe Agricultural Knowledge and Innovation Services (ZAKIS) project. The project is premised on the Agricultural Centres of Excellence (ACEs) which were established in partnership with the Government at Chibero Agricultural College and Matopos Research Institute as well as at district level in Insiza, Mhondoro-Ngezi, Matobo, and Chegutu.
This new concept has begun to produce results as farmers including the youth and women are beginning to reap the fruits from participation in the project, and are optimistic about their future.
A visit to the Insiza District Centre of Excellence revealed that the farmers’ crop and livestock yields are testimony to the impact that the centre is making in the community. Insiza is situated southeast of Bulawayo and it borders Gwanda district to the south, Zvishavane to the east, and Umzingwane district to the west. It is a semi-arid area in Region Four and it experiences very low rainfall, seasonal droughts, and severe dry spells during the rainy season. Accordingly, the Insiza centre has been promoting climate-smart agriculture, drought-resistant crops particularly small grains, and fodder crops that support livestock production.
Masukume reflects on the impact that his newly found source of knowledge is making on his life.
“I moved away from traditional agricultural practices and embraced the knowledge and innovations that our centre at Insiza is teaching us and I have taken a new direction for my cropping and livestock activities.”
He is confident as he talks about his achievements and his close liaison with the Insiza District Agricultural Centre of Excellence.
“I am learning about good farming methods here and implementing them at my homestead. As a result, I have now ventured into cash crops like sorghum, sunflower, groundnuts, soya beans, sesame seeds, and sugar beans which I sell to big companies in Bulawayo. I am now generating an income from these crops instead of just growing maize for my family’s consumption,” he said.
As he embraced the knowledge and guidance from the Insiza District Agricultural Centre of Excellence, his homestead turned into a “mini agricultural centre of excellence”. He now showcases his achievements and his zeal to share his experiences with the community has turned him into a household name in the district.
“I also have a herd of 62 cattle which I hope to improve and increase, so I welcome the artificial insemination project that is being administered through the centre.”
Artificial insemination is one of the initiatives that is being implemented under ZAKIS. Its objective is to improve cattle breeds and enhance productivity in Zimbabwe’s livestock sector. It is being carried out in Matobo and Insiza districts by the Matopos Agricultural Centre of Excellence in collaboration with the International Crops Research Institute for the Semi-Arid Tropics (ICRISAT).
Masukume takes pride in his newly acquired vehicle that he also uses to provide transport for his fellow farmers whenever they visit the centre to attend learning events.
“I am very grateful for the knowledge that I and other farmers continue to gain from this centre and each time we meet, there’s always something new to learn and share among ourselves; we cherish this interface.”
The Insiza District Agricultural Centre of Excellence has formed partnerships with institutions and the private sector to facilitate knowledge and best practice transfer to farmers. As a result, Lupane State University this season established some small grains trial plots at the centre as part of its ongoing scientific research. This has seen an increase in the number of varieties under scrutiny at the centre and it has broadened the farmer-focused interface between agriculture research and extension.
“Local universities and seed houses have brought several crop varieties to our centre for trails and demonstrations. This has changed our perspectives on the right crops to grow here. The trials they are doing have led to the introduction of a scientific approach to agriculture for the first time in our community; this has helped us tremendously and the potential for us to improve is very encouraging.”
There is increasing hope and optimism in the Insiza community that their fortunes are changing through the District Agricultural Centre of Excellence’s scientific and innovative approaches which are responsive to farmers’ needs and adaptive to the changing environment.
“The centre is demonstrating crops like sunflower and cowpeas which will lead to diversity in our production and sources of income. Drought-resistant small grains such as sorghum and millet that are being promoted at the centre are a welcome development for our community and we look forward to reaping the rewards from these as we now know that we can sell them to commercial breweries,” said Masukume.
Learn more about the ZAKIS project.