From Smallholder to Medium-Scale Dairy Production: The Story of Washington Sagonda 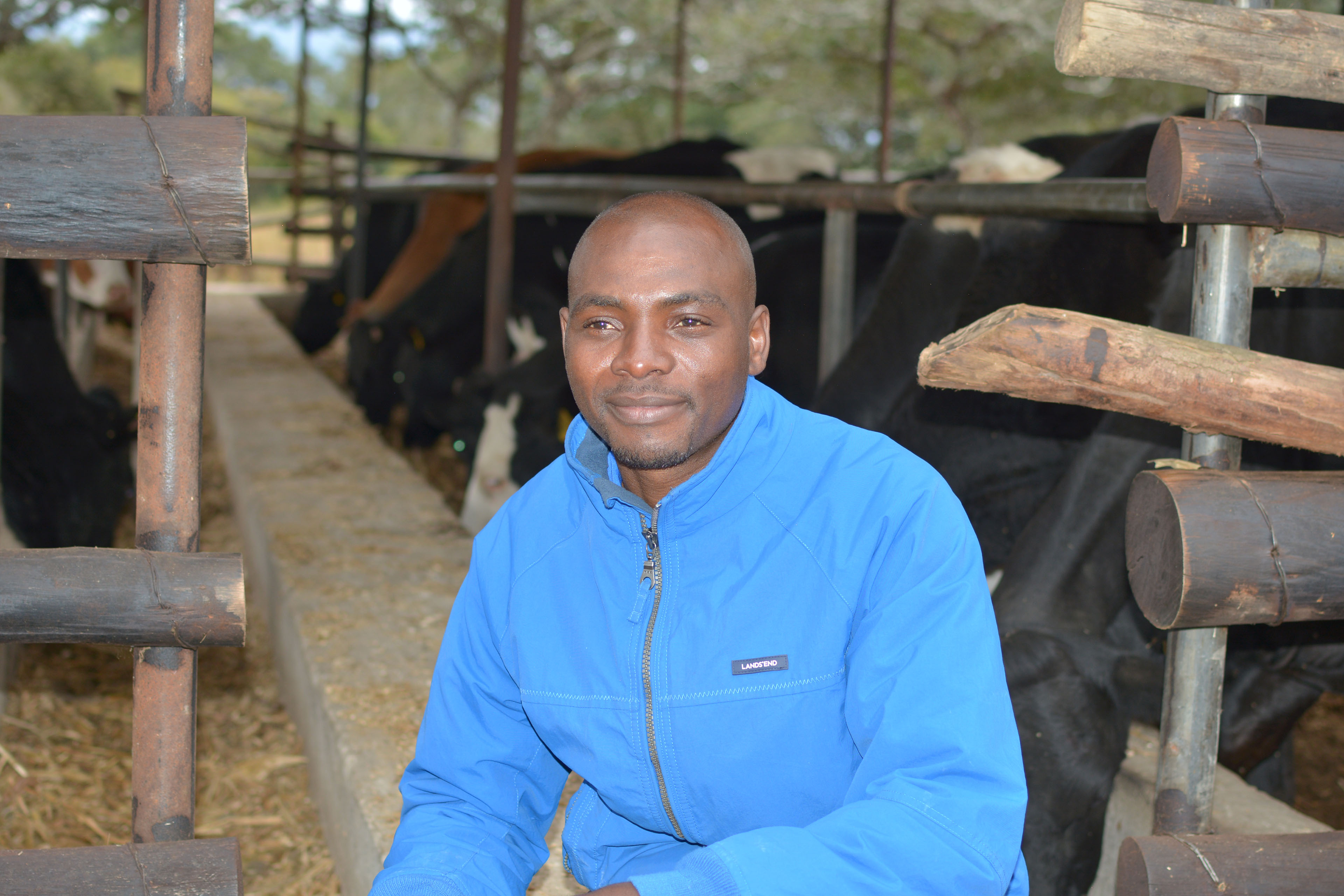 The TranZDVC project is working with farmers like 35 –year-old Washington Sagonda in Watsomba area of Mutasa district in Manicaland Province to engage themselves in more profitable ways of doing dairy farming, as a result of access to finance, feed production interventions and training and technical assistance.
TranZDVC has improved Sagonda family’s fortunes. The project is helping him to take advantage of market opportunities to increase their dairy incomes. The farm started as a small-scale dairy and grew into a medium-scale dairy, currently producing 205 litres of milk per day milking 12 cows.
Sagonda was one of 34 households at the local Tsonzo Milk Collection Centre (MCC) selected for a Matching Grant Facility (MGF) and was supported with a 70% contribution towards setting up of a solar powered irrigation system and construction of a reservoir dam.  Sagonda paid 30% as contribution towards the.purchase of some components of the irrigation system. This was part of his match towards the Matching Grants Facility. In addition, the farmers were trained to grow forages, produce hay to make home-based feeds through animal feeding demonstrations.
Before, Sagonda was involved in horticultural production supplying vegetables to the Mutare market, 43km from Watsomba business centre. He diversified into dairy farming with proceeds from the horticulture enterprise, starting with two cows. He has never regretted this move.
‘’ I’ve now built my herd to 58 cows. Out of these, 19 are heifers and 13 are currently milking” says Sagonda.
In 2018, Washington won the Overall National Small-scale Dairy Farmer of the Year Award organised by the Zimbabwe Association of Dairy Farmers (ZADF), a TranZDVC partner.
From the 14 milking cows, Washington produces an average of 205 litres of milk per day, which he supplies to the Tsonzo Milk Collection Centre. Previously, he produced an average of 120 litres of milk per day, milking six cows.
Sagonda has stopped using a diesel powered generator where he spent close to US$200 on diesel fuel drawing water from a nearby stream. Access to clean water has also reduced the number of times he needs to dose his herd, from twice a year to once a year.

The reservoir constructed at Sagonda’s Farm through the matching grants facility
On-farm feed production is at a high level. Sagonda benefitted from the project trainings on fodder production and feed processing. Additionally, his farm was used to trial mixed- crop silage production using maize (70%) and velvet beans (30%). According to Sagonda, the mixed silage feed has a high protein content which has led to increased milk production at his farm.
The enterprising dairy farmer has also ventured into breeding dairy cows, selling heifers for around US$1,400 to US$1,500 per animal.
‘’I never thought I’d ever reach this level of milk production to be one of the top dairy producers in Watsomba area. With the assistance I have received from TranZDVC, I am now aiming for commercial dairy farmer status,’’ he says with a chuckle.
With access to the MGF, TranZDVC dairy farmers have entered into productive and sustainable investments. The project has assisted farmers in preparing for artificial insemination, including identifying suitable cows or heifers, proper feeding, and constructing sound cattle handling facilities.